I’ve been trying to build a small motion sensing light for a dark nook in my house. Originally, I started off with a simple Motion sensor PIR similar to PIR Motion Sensor, and just wiring the digital out to a simple LED. That worked, for several weeks happily, but it just wasn’t bright enough.

I had a heap of spare NEOPixels from a cosplay I built last year so I thought I could get more light by putting a Gemma between the PIR and some NEOPixels. The idea was for the Gemma to sense the PIR signal go high, and use that to trigger a fadein-wait-fadeout of the NEOPixels.

I got the prototype working with a Gemma v2, but that board didn’t fit physically in the enclosure so I looked around and settled on a 5V Trinket as it seems to have the same chip and capabilities, but is physically smaller.

The Trinket does seem to behave a little differently, but I did get it working. Once the Trinket based prototype was working via breadboard and wire spaghetti, I soldered it all together.

And to my joy, it worked perfectly… for about 2 days. After that, the lights came on, and just stayed on, and the colour (which should have been white) had changed to a warm yellow.

Power cycling it showed that there was no longer enough power in the batteries to let the Trinket do its thing.

Here is a rough diagram of what I’ve set up: 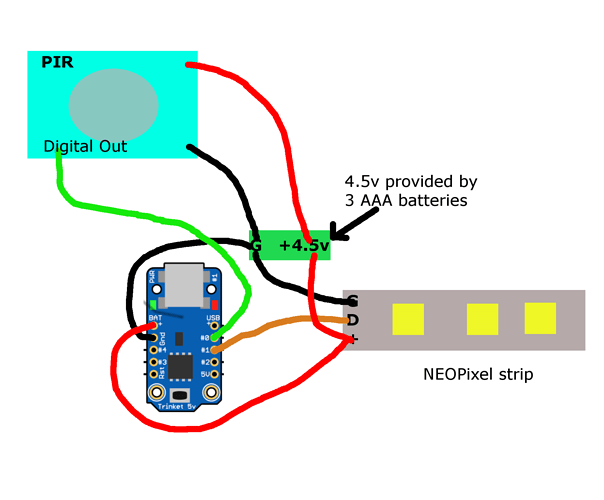 So what I’m wondering is whether I’m just asking too much of those 3 AAA batteries. I’ve kept all the wires as short as I can, and everything has been soldered. I don’t know whether I should have found a way to tell the neo pixels to turn off when they fade out. I use the .show() function and just set the colour to 0x000000 to turn them off, but does that stop them drawing power?

Is there a better power source that would last a lot longer (given that the enclosure only just fits the 3AAA batteries now)? I can’t afford to burn through 3 AAA batteries every 2 days.

Worst case, I might have to abandon the NEO Pixels and replace them with some other superbright white LEDs, but I’m not sure if that will save me power.